Script Header is the general overview of the selected script. It includes information that affects the physics and frames of the move.

The scripts head section is found in a tab at the top of the selected script. The section is split into 9 rows. 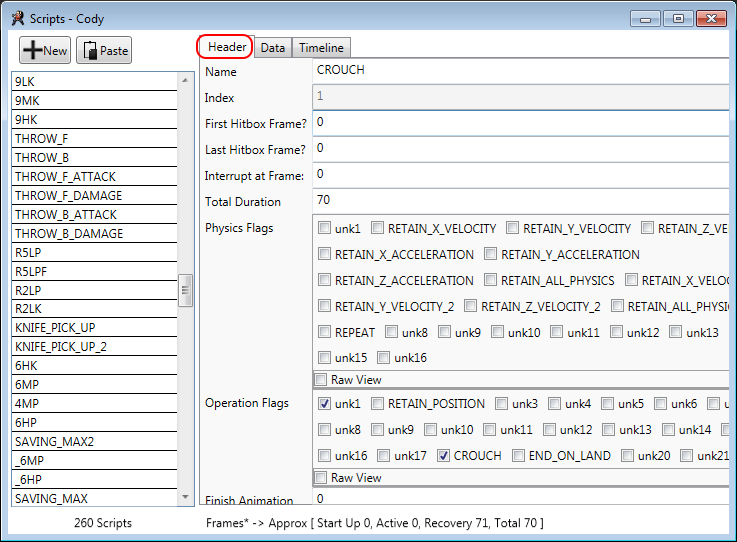 This is the name of the move, this can be changed in either the Script Header section or the left frame list of moves.

The index is just that, an index number for the move. Moves from 0 to 202 are expected to always appear at that specific index number (E.G. 5 for the Jump move.) Moves with an index number greater than 1000 are used for stances where a particular move is replaced by the stanced version. For example with Cody: Index 256 is 5LP, Index 1256 is 5LP_Knife. For each level of angry scar Unk1 value you must increase the index number by 1000. Stance 1 = +1000, Stance 2 = +2000, ect.

First hit box is the first frame that a hit box appears (note this number is BEFORE the Speed values are calculated). Currently the actual effect this value has on the move's properties is unknown.

Last hit box is the last frame that a hit box appears (note this number is BEFORE the Speed values are calculated.) Currently the actual effect this value has on the move's properties is unknown.

This is the frame that the move can be interrupted into another input (including movement.) This value is separate from Cancels this is used for when moves are considered “completed.” All the move is technically finished, many moves have animations that can be interrupted before the animation completes. For example: Taunts have varied lengths for the whole script, but universally taunts can be ended prematurely on frame 45. These interruptible frames are usually used simply to create a smoother animation to reset the character into their neutral stance.

Unknown Flags 1 / Physics (depending on Ono version) dictates how much velocity and acceleration is retained from your previous action. (For example if you are jumping forward and use a move like Guy's Elbow Drop you'll notice he doesn't actually instantly come to a stop but retains different momentum from when he uses Bushin Flip or does a neutral jump.)

There is one exception, the value “1024” has nothing to do with acceleration or momentum and instead dictates that the script must be repeatedly run until the player manually interrupts it, this is used for scripts such as Stand.

As you can see, for the most part the flags simply double the previous values unless combined.

Operations Flag / Unknown Flags 2 dictates the position of the character as well as the way that the move is completed.

As with the Physics flag there may be more yet undiscovered.

Finish Animation / Unknown Flags 3 is used to dictate what animation to use when the character reaches the floor of the stage. This is used only in the “Blow” scripts. This is determined as the index minus 26.