Hit boxes are the basis of how two characters interact in fighting games. Hit box data can be found in the Scripts section of Ono Tool. When you select a move from the left frame of the Scripts window you will find one of the sections listed is Hit box.

The hit box table of scripts is split into 24 columns. 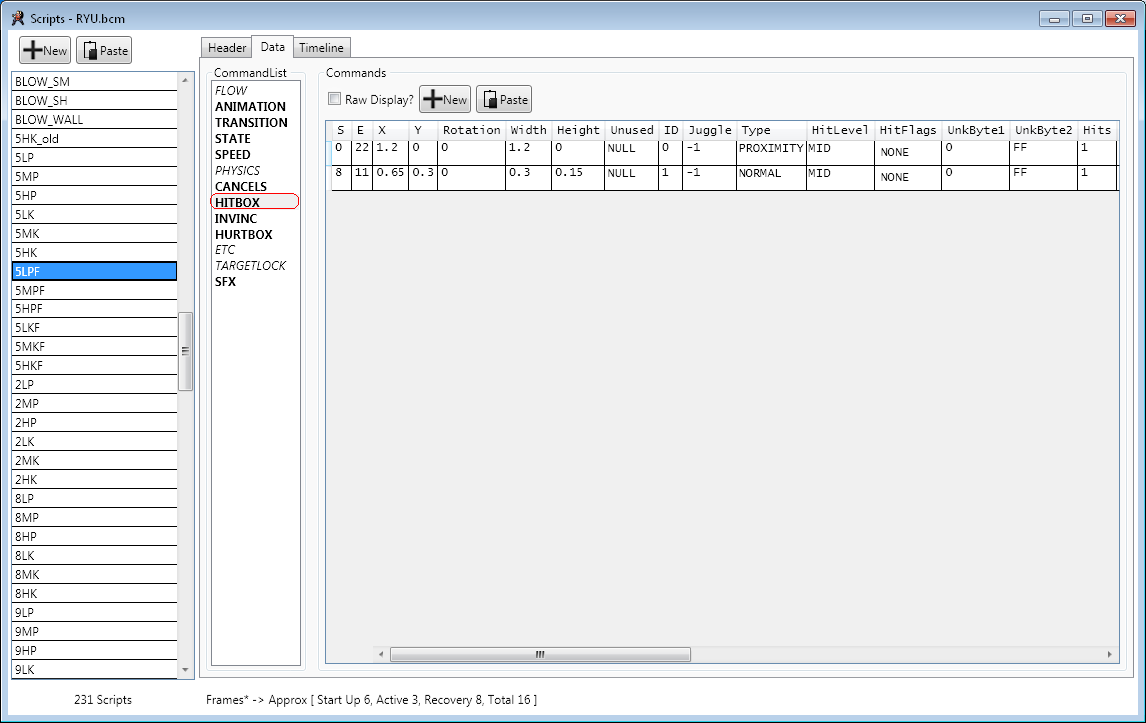 This is the position of the hit box, the X and Y coordinates are relative to the part of the body that the hit box is attached to. All hit boxes and hurt boxes are attached to parts of the character model with the exception of VFX hit boxes.

Currently the usage of this is unknown

If a value of 0 is used then the game will create a hit box based the default size for that body part's hurt box based on the model bones.

As this is says, it is unused.

This is the id of the hit box, if two hit boxes have the same ID number than when one is used the other one will disappear. This allows you to use multiple hit boxes on the same frame without having a move be multi-hit.

Type designates what kind of hit box is being created. There are 5 different types of hit boxes

This designates how the attack hits and how must be blocked if it can be at all. There are 5 types of hit levels.

These are flags used that changes properties of how the hit box interacts with hurt boxes. There are 14 flags selectable, you are allowed to select more than one flag at a time.

This is the part of the body that the hit box follows, if it's set to 0 then it follows the Waist.

When this value is set it will stretch the hit box between the body part used for UnkByte1 and the body part designated by UnkByte2. This is used on moves such as Ryu's Shoryuken which originates at the knee and stretches up towards the hand during the second part of the attack.

This is the number of times this hit box will repeatedly hit.

This is the juggle potential of this hit box.

This is how much to increase the current juggle usage on an opponent in a juggle state when this attack hits.

Currently unknown what this affects.

This value is used for Rose's reflects. There are currently 4 known values

As this is says, it is unused.

This tells the game what part of the Attack Table to use when the hit box connects with an opponent.

This section should always remain empty