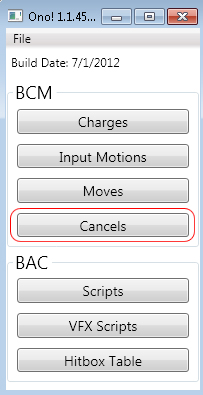 Cancels are points when a move can be canceled into another move, this include target combos, special moves, supers, ultras, dashes, or any other ability to end a move prematurely and begin another move. This is handled by two sections of the Ono Tool. First is the “Cancel List.” The cancel list is a just that, a list of moves you can cancel into when a list is selected. Moves that you wish to use for the Cancel List must be predefined in the Moves section of the Ono Tool for them to appear.

The first part of move cancels is the 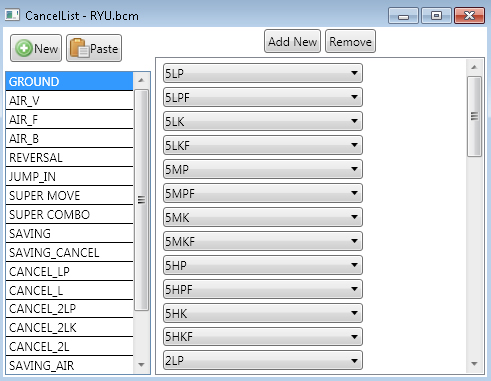 These are the moves you can cancel to when the cancel list is selected in the moves script section. For a move to be listed it must be defined within the Moves section of Ono.

The second part of Cancels is defined within the move you wish to be able to cancel with a new move (If you wish to cancel a punch into a kick you must define the cancelable situation within the punch script). Every cancel script must be paired with a “Stop” condition 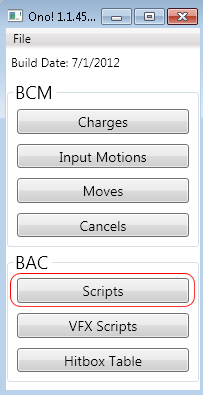 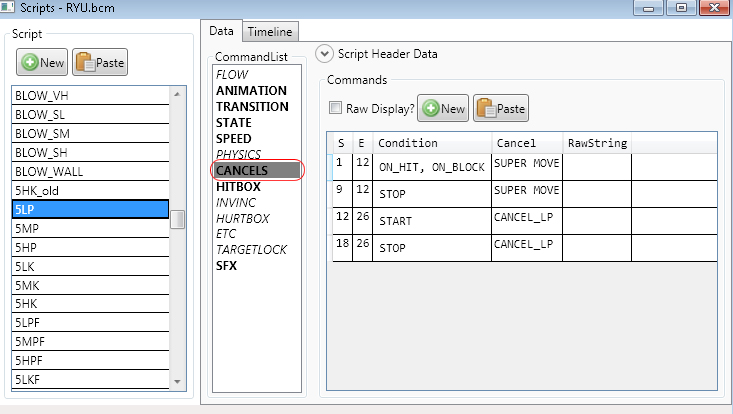 The Cancels section has a 5 column table which are labeled at the top “S” “E” “Condition” “Cancel” and “RawString.”

The S and E columns represent “Start” and “End” frames for the Condition of the Cancel. The first frame you want the game to start checking for the condition required to cancel is put in “S” the last frame you want the game to check for the Condition required for the cancel is put in E. The value must be a whole number and positive. Zero is allowed.

This section is for selecting what “Cancel List” you want to use for the attacks cancel options. Remember that you must have a “Stop” condition set that uses the same cancel list otherwise it wont work.

Currently this does not have any function that is known. Leave it empty.