Hurt boxes work in tandem with hit boxes and invincibility to create the basis of how two characters interact. Hurt boxes are the vulnerable parts of a character that when touched by a hit box will result in an effect.

By default there are exactly 20 Strike/Projectile hurt boxes, 3 throw hurt boxes, and 3 Push boxes on each character. Unlike hit boxes it is not possible to actually create a hurt box, instead the only thing that can be done is take an existing hurt box and modify it. The first option is you can disable specific hurt boxes from being vulnerable to specific attack types by using invincibility. After that hurt boxes can be manually modified within the hurt box section. Either changing their location relative to the original body part they came from, or by modifying their size relative to the original parts size.

The hurt box table of scripts is split into 11 different columns. 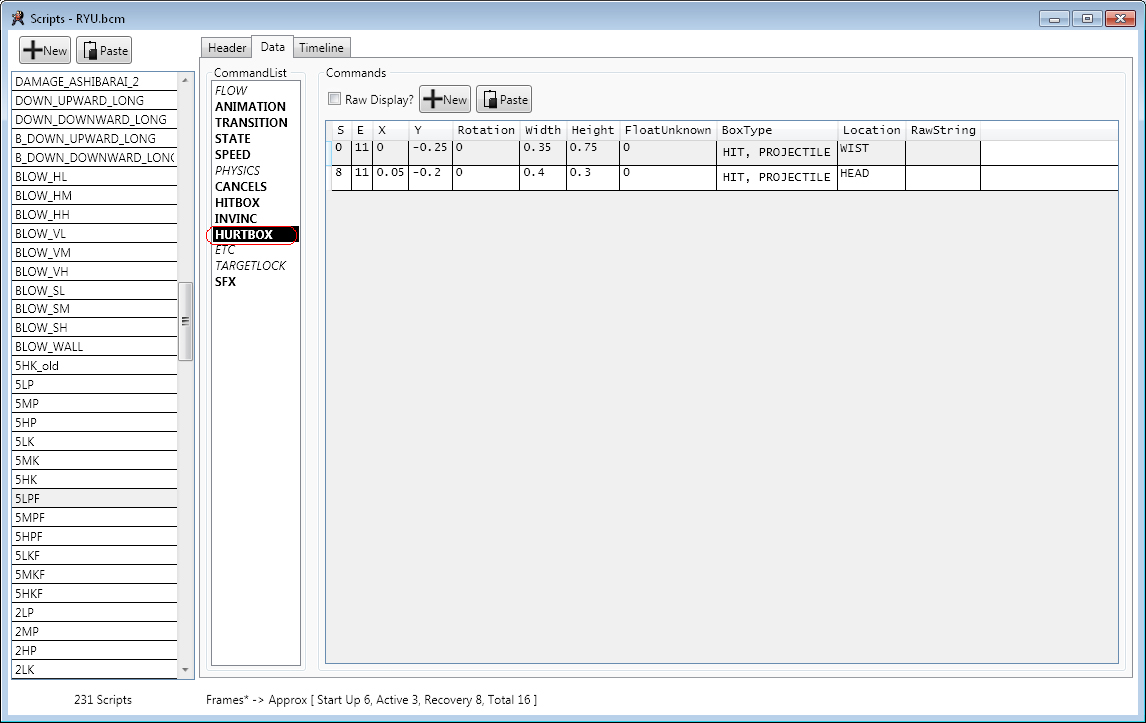 This is the position of the hurt box, the X and Y coordinates are relative to the part of the body that the hurtbox is attached to. All hurt boxes and hit boxes are attached to parts of the character model with the exception of VFX hit boxes.

Currently it is not known if this is used

This designates the size of the hurt box. Width and Height are the distance from the center of the of the hit box, a width of 0.15 would actually be a hurt box size of 0.3 as it's 0.15 both left and right from the center.

If a value of 0 is used then the game will use the default size for that body part's hurt box based on the model bones.

Currently what this does is unknown.

Box type dictates what kind of hurt box is used. There are 4 options and you can check any combination.

This is the body part being modified. The body parts you can modify are: