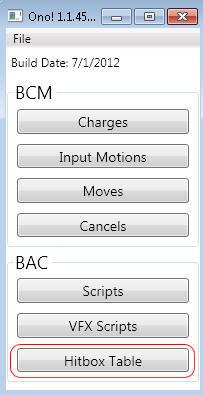 The Hit Box Table is accessed from the main menu of the Ono! Tool. This section affects the damage, stun, meter gain, push back, hit stun, juggle, and physics of moves once they hit the opponent (or are blocked). Each hit box in the game is tied to a hit box table value.

The hit box menu is split into 2 sections.

The left section is where you select the move you wish to view. Currently the Remove, Import, and Export buttons are disabled

Any move that is tied to the data here is listed. A hit box data can be tied to multiple moves. Any empty sections (such as #13 on the example image) can be modified if you wish to create a new move without changing an existing move. You can also simply select “Add New” which will add an empty value at the bottom of the list.

Selecting a move on the left side will bring up it's data on the right window frame: 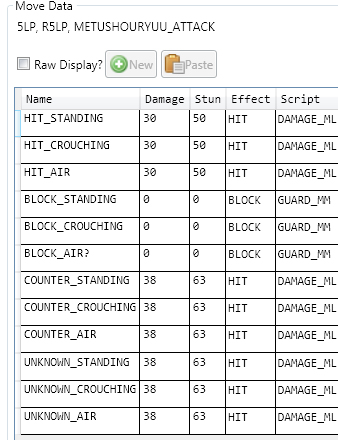 Currently the New and Paste functions are disabled. The “raw display” shows the exact numbered values for each section, in general though you don't need it.

The table has several sections each of which affect something different. The sections are as follows:

Names are unchangeable. Each value is self evident except for “Unknown_Standing/Unknown_Crouching/Unknown_Air/Block_Air” which currently seems to do nothing.

This section governs the damage the move does when interacting with the opponent who is in the listed state (Standing/Crouching/Air/Counter Hit/Blocking) the value must be a positive whole number. Negative values do nothing.

Same as damage values but instead for stun. Like damage stun can be added on block but a stun can only be triggered on a successful hit. Value must be a positive whole number.

This is the type of script that is run when hit. there is Hit, Script, Blow, Blow2, Bound, and Bound2.

This section refers to the actual script run (while Effect is the TYPE of script) you will find the scripts pertaining to damage types near the top of the list. For the different damage scripts there is some keys you can follow to try and understand what animation you will get. The first letter is what are the damage animation plays. An example would be if a move is set to “DAMAGE_ML”, the light hit animation will play, but it will be a midsection light hit animation.

Hitstop refers to the time where the game freezes when a hit connects, this is done to aid in the act of comboing and canceling moves. Without hitstop it would be exceedingly difficult to hitconfirm or cancel any move, in addition hitstop has the added benefit of helping to make moves feel more “forceful” by giving them a sense of weight when they connect.

Hitstop occurs before pushback or damage animation. There are only 3 sections you need to worry about for hitstop

In general Self Shaking is never used. Also when modifying values you generally want to always have the Self Hitstop, Target Hitstop, and Target Shaking all be the same. You can change the amount but you want all 3 to be equal as otherwise it can create unintended issues with animation, pushback, or frame advantage. However this is not a rule, as some moves do actually use a different self hitstop and target hitstop, such as Ryu's close medium punch.

This section refers to the special visual effect played when a move connects.

This section is Unknown as of writing this

This is a secondary special graphical effect to play when the opponent is hit. This allows more than one hit spark to play at the same time during an attack. The values are the same as for Hit GFX, however there is no list so you must manually enter any values you want.

This section is for what voice file the victim should play when hit.

This value pertains to the amount of points received when the move connects, only effects playing Arcade Mode or the Car Smashing minigame.

This is how much super meter the character will gain when connecting with the attack.

This is the amount of super meter the opponent receives when hit by the attack. In general this value is equal to 50% of the Self Meter value except in the case of Supers and EX moves.

This is separate from “Juggle Potential” and “Juggle Increment” found in the hit boxes section. Juggle Start refers to what juggle point value the move should start at when the move hits the opponent. If a move has a juggle start of 0 (zero) it will be considered a free juggle and the next move will bring the move up to juggle potential 1

Where x is the Target Animation Time

It is best to experiment and test this on your own and reference other moves whose data you have access to via the shoryuken frame data wiki until you have a move at the amount of hitstun you want.

This setting pertains to specific miscellaneous settings for the move when it deals damage. The known settings available are:

These values pertain to the physics used on a move during push back or juggling. These follow the same rules as physics but are applied to the opponent.

This refers to the amount of distance that the characters are pushed apart when the move hits. This is only applied to attacks vs opponents on the ground. A negative push back will pull the characters closer together.