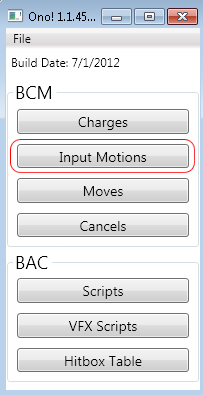 Input Motions is for creating series of directional inputs that the game will then recognize as a single motion for the purpose of performing special actions.

The Inputs section is split into a 2 frame window, the left frame is the list of recognized motions. You can create new empty motions or rename any listed item in this frame. Selecting one of the listed motions will display it on the right frame. The right frame is set up into a table with 7 columns which are Type, Buffer, Input, Charge, MoveFlags, Flags, and Requirement.

Type is precisely that, what Type of input is being created. There are 4 options

Buffer is the number of frames allowed between inputs. If a move has a buffer of 10, then the next part of the input must occur within 10F of the previous input.

Input is the required button or direction for that part of the Input Motion. If a move has multiple buttons in one section (such as Honda's Hundred Hand Slaps which has LP, MP, HP) then any of the buttons pressed will be accepted as part of the motion. This allows for multiple inputs to cover the same part of the motion.

This is a drop down list of the Charges available. For more information on Charges visit the wiki page on it.

The move flags section dictates what inputs are accepted as valid from the list of inputs in “Input” column. The move flags are the same as those found the Moves section.

The Requirement index is used for inputs that have multiple buttons/directions set for an individual action. For example Gouken's Ultra 2 charging action or Chun Li's lightning legs. The requirement is the number of inputs needed to move on to the next row of inputs. If the move only has 1 input (such as “down” before proceeding to the next listed input in the motion, then the requirement can be set to 0)